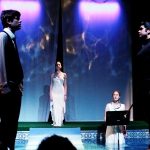 We recently worked with Flintridge Preparatory School, a private independent high school located in La Canada, CA, in their rendition of the Broadway production “Metamorphoses”. Coordinator Vlad Dan first contacted us in February of 2012 with one request. Help him get a pool on stage for an upcoming performance. Secard Pools manager Greg Budinko of our Pico Rivera branch was up for the challenge. The design and construction process came together quickly and before we knew it, 4 performances were sold out days before the show’s debut. Partly due to the buzz around campus about rumors of an actual pool in the middle of the Miller Theatre stage. 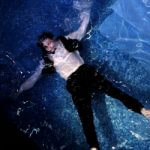 The 9′ x 15′ pool constructed by Dan, boasted our 20 mil Oxford vinyl liner to offer an elegant Greek design tile and deep reflecting floor. At 2-1/2 foot deep, the performers made good use of the 135 square foot stage pool while depicting the theme of the transformation process of Greek myths throughout the play. Drama teacher for Flintridge Prep, Rob Lewis, directed a stunning performance but gives a great deal of credit to his students, stating “These students met the material with incredible reverence – even more than I initially expected”.

Written by 2002 Tony Award winner Mary Zimmerman, the play is based on Greek mythology and its central focus – change, and how we handle it. 3 years after its initial opening in Chicago, Metamorphoses made it to Broadway in 2001. The play is still professionally performed around the country today. We are pleased that we had the opportunity to be involved with Flintridge prep and their amazing program. You can see more information on the performance and pictures of the cast, rehearsal and more of the show by visiting Flintridge Prep’s Campus Press.